A bright winter’s morning, and a fantastic opportunity to get some pictures of a deserted, local, suburban shopping centre. Not an abandoned shopping centre, but in Perth on a Sunday morning, with the exception of a bakery, all of the shops are closed, so they are certainly deserted. There is no intermediate stage in their weekly usage—the centre is either full, or it is empty. Sunday afternoon it is full; Sunday morning is empty. There are a few centres that host Sunday morning markets, but in most car parks all that you find is a broken down car or abandoned shopping trolleys.

Shopping centres are fascinatingly banal places. ‘Modern’ architecture that is really not that modern, that after only a few years will start to look depressing and dated. As paint fades and facades start to chip they begin to take on the appearance of last decades’ fashion. Which is, of course, precisely what they are, and exactly what I was intending to try and photograph.

Pulling into the car park the first thing I noticed—the only thing I noticed—was a fire-engine-red 1959 Cadillac convertible, sitting smack in the middle of the parking area, all by itself. A classic of space-age fins-and-chrome, bullet tail lights and an acre of bonnet and boot, it was a perfectly restored monster. It is easy to forget how big cars used to be.

The camera came out I started taking a photo or two when a more restrained Pontiac pulled into the parking area.  A 1956 Laurentian, a model that I have a particular fondness for, because my partner owned one before we were married.

By the time I’d snapped at it from all angles, a pair of Studebakers had arrived.  Then a 1955 Chevrolet Bel Air, a Pontiac GTO, another two Cadillacs … Then cars started arriving faster than I could keep up with them.

In the next hour or so around 150 of them pulled into the car park, all American, most of them left-hand-drives and all of them immaculately restored.

This was my favourite on the day, the first one that I saw. 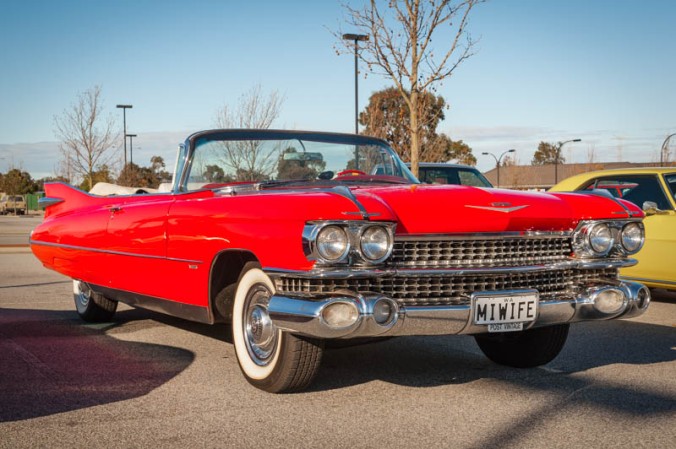 More than any other cultural icon, these cars have come to epitomise an era.

Following the end of World War II, the USA was a hotbed of internal conflict.  The unsubstantiated fear of the spread of international Communism saw the instigation of ‘The House Committee on Un-American Activities’, and along with Senator Joseph McCarthy, the Chairman of the ‘Subcommittee on Investigations of the Government Operations Committee’, sought and discovered Communists everywhere.  Many notable Americans had their careers ruined by these paranoid zealots, or were hounded out of the country.

The Cold War with USSR was in full swing, and it was the atomic age.  There was atmospheric testing of nuclear weapons which in turn fueled an on-going doctrine of ‘M.A.D.’, or Mutually Assured Destruction.  It saw children being forced to ‘duck-and-cover’ in schools.  A conservative and restrictive moral code saw the reversal of many of the social advances that women had attained during the war.

Paradoxically, the 1950s was also a time of incredible optimism.  Industry, which had been cranked up to a fever pitch churning out aeroplanes, weapons, vehicles and supplies for the forces fighting in the Pacific and Europe, were now looking for other products to manufacture and the surplus industrial production was channeled into other areas such as household appliances and cars.  It saw the birth of rock and roll and youth culture.  Art was big and muscular with painters like Jackson Pollock pouring and dribbling on landscape-sized canvases.  The Beats were changing literature, rockets were going into space, and architecture and design was reflective of the atomic and space age with a style that came to be known as ‘Googie’.

And then there were the cars.  In automobiles, by the middle of the 1950s all traces of the restraint of the war years had disappeared.  The new vehicles looked like space ships, with rocket tail lights, streamlined bodies and cockpits worthy of an astronaut.  The cars came in versions that culminated in automatic and electric everything.  It is interesting to ponder that the arena of design, particularly of motor vehicles, was the antithesis of the social restraint being felt in the larger society.

Like flashy neon signs, bobby sox, Little Richard and ‘Leave It To Beaver’, these cars are now anachronisms, and now seem out of place in a world of un-leaded petrol, ‘Smart’ cars and hybrids.  But there is still something special about them, and their appeal is sufficiently strong for a small army of car fanatics to lovingly restore and care for them, and occasionally bring them out on a sunny winter Sunday so that the rest of us can look at them and dream. 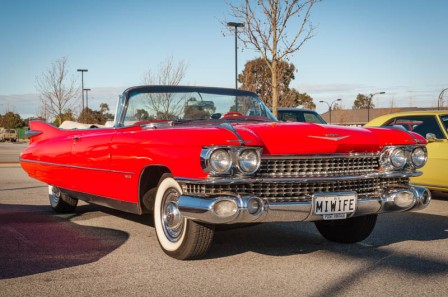 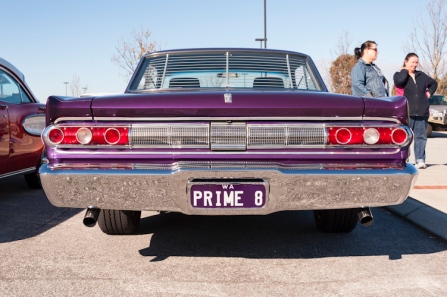 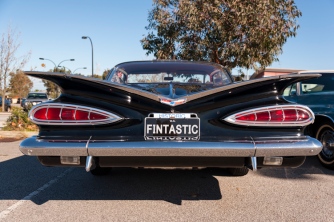 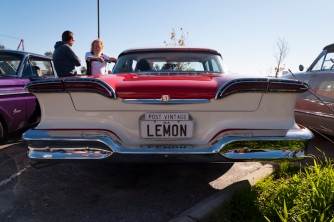 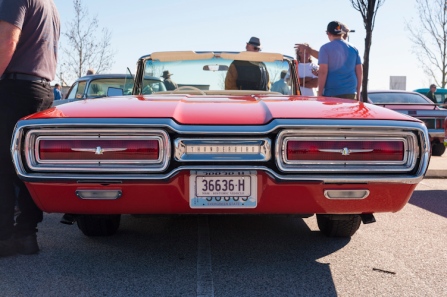 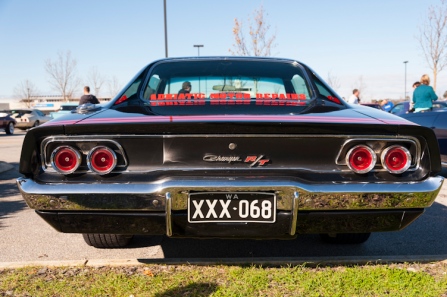 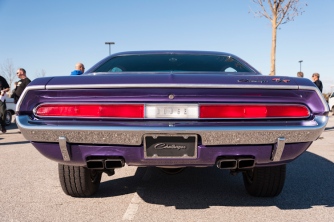 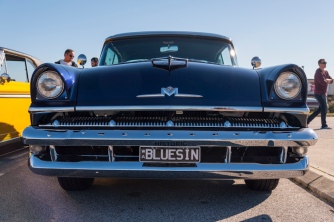 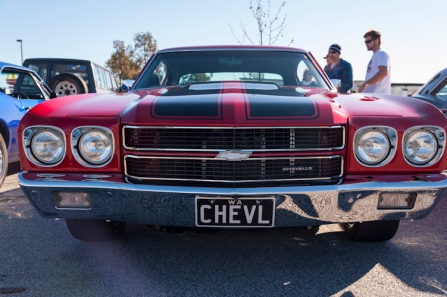 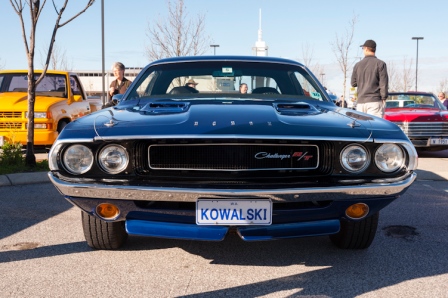 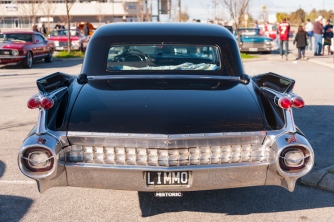 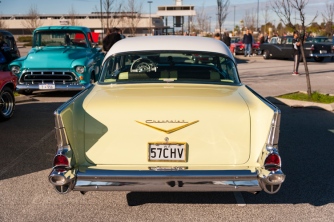 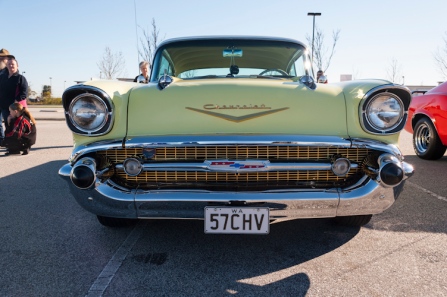 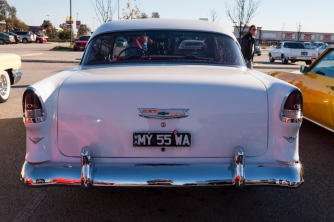 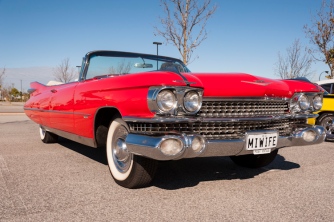 I didn’t get any photographs of the shopping centre, but there’s always next week.

If you would like to see more photographs, you will find them at: http://www.stuartpeelphotographer.com